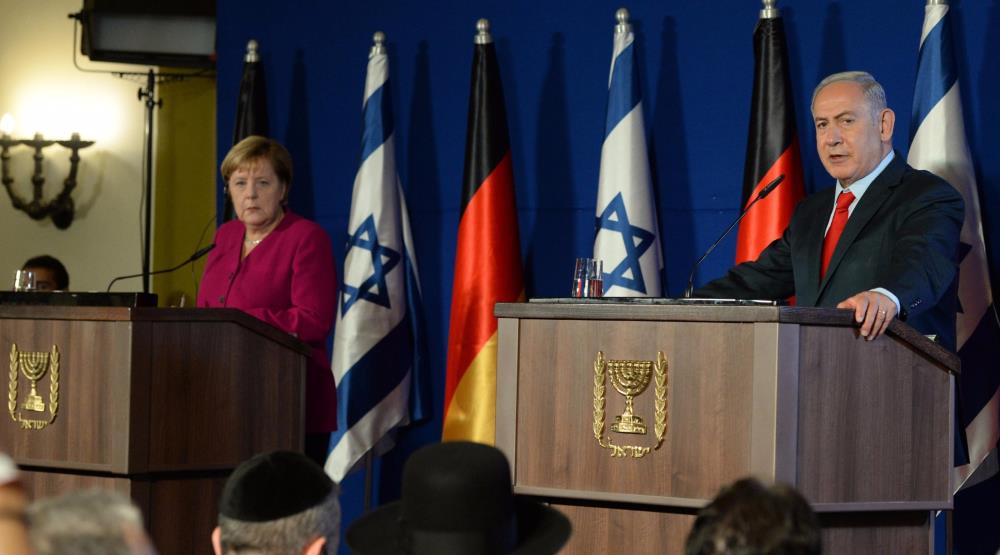 After the meeting, Prime Minister Netanyahu and German Chancellor Merkel held a joint press conference during which the Prime Minister made the following remarks:

“Angela it’s a pleasure to welcome you and your distinguished delegation to Israel once again to Jerusalem. You had been the pioneer of these governmental meetings. They make a big difference. It allows us to expand our cooperation, our friendship, to the advantage of both our countries. I’m not just saying that in a general sense but as you’ll see in a very practical way.

Ten years ago you famously addressed the Knesset. You declared that Germany and Israel are linked by a special, unique friendship. You described this friendship as being marked by an enduring responsibility for the past, by shared values, by shared challenges and shared interests. You said that Germany would never forsake Israel, and would remain a true friend and partner to Israel and that Israel’s security would never be open to negotiation.

I have to say Chancellor Merkel that you have kept true to your word and you have shown it time and time again. I thank you and all the people of Israel thank you for your unrelenting support for Israel’s security. I also thank you for taking a very strong and unreserved stance against antisemitism. You have been unyielding in your efforts to recognize history, to defend the truth, to stamp out antisemitism in Germany and throughout Europe.

Under your leadership, relations between our two countries and peoples have flourished. Today we cooperate in almost every field. These governmental meetings produce tangible results in security, science, trade, commerce, cyber. Today we discussed about deepening our cyber cooperation, cyber security and join development assistance to other countries, an idea that we discussed in one of our meetings, and we decided we would work together in Africa, we are doing that. It’s a great success. We’re expanding that as well.

But I think what will mark this visit, what will turn it into a milestone, is our cooperation in one specific area, which is technology and innovation. This is key to the future. The future belongs to those that innovate. We have two extraordinary economies. Germany is one of the great economies of the world. It has singular capacities in science, in industry, in technology. Israel is among of the leading innovation nations in the world. Some say right there at the top. This morning we visited an innovation exhibition of Israeli and German companies and I came back, as you did you told me, with a tremendous impression of the talents and the initiatives. We saw how German and Israeli companies are innovating and working together including in transportation, digital health, telecommunications, agrotechnology and many others. Many, many other fields. In fact it’s unlimited the potential here.

Germany for an example is a leader, the world leader in the automotive industry. Israel is a global leader, and has become a global leader just in a few years, of autonomous driving technology. And the two things are being married. Together Israeli hi-tech expertise and the German car industry are putting self-driving cars on the road safely, securely. And this is just one example. There are many, many more.

Together, Israeli and German companies are increasing access to drinking water, identifying new cures for disease, new techniques for surgery and medical treatment, protecting our environment. I think that strengthening the cooperation between our two countries doesn’t just benefit our two countries, this benefits millions and millions of people around the world. So it’s good intrinsically, it’s good nationally for each of us, but it’s also good I believe for the world at large.

In the meeting today we identified several areas to increase our cooperation. We signed agreements on trade, the environment, energy, transportation and housing. And I believe that this cooperation is unique. There are very, very few economies in the world today that have our capacity. I don’t want to, since I’m also the Foreign Minister I have to be careful and not actually name names or place numbers on it, but I truly believe that the talents that are stored in Israel and Germany are among the greatest in the world and can change the world.

We are seizing the future together but we also have to defeat the forces that want to drag us into the past. And I believe that our hopes for the future today are being challenged by the forces of radical Islam, and primarily the forces of Daesh on the one side and Iran and its proxies on the other side. There is no question you know it’s not a secret, certainly not a state secret, that I opposed the deal with Iran because I thought that it paved its way to a nuclear arsenal. But the deal also did something else. It put billions of dollars in the hands of the leading sponsor of terrorism in the world and the leading aggressor in the Middle East – Iran.

And this money unfortunately did not go to improve the lives of Iranian citizens. Instead, it went to funding a war machine, Iran’s war machine, that is bent on conquering the entire Middle East. And I have to say that Iran’s aggressive activity also extends to Europe. I spoke about the fact that Israeli intelligence gave European services the information that Iran’s services were planting, planning in Europe by Iranian diplomats, Iranian officials, terrorist attacks on the soil of Europe. And I was very glad to see that an Iranian diplomat was recently arrested in Germany for this failed bombing plot in Paris. I was also glad to see the recent decisions, I think two days ago, by the French government against these diplomats and against Iran. I believe that all nations must join together to press the Iranian regime to fully dismantle its nuclear weapons program. They’re still trying to hide, I exposed some of that in the UN. They’re trying to get there through the back door. But also to cease its terror activities in Europe and around the world, and also to stop using Syria as a base for attacks against Israel. Syria and Lebanon. And ultimately they have to get out of Syria altogether.

Israel will continue to do what we must do to defend ourselves, to defend our state and our people. We will continue to block Iran’s efforts to use Syria and Lebanon as forward bases for attacking Israel. And we will also continue to engage with new partners in our region. The danger that Iran poses has brought one benefit, I keep saying this and I’ll say it again today because it’s true every day, it’s brought Israel and the Arab states close as never before. And I believe that this new relationship is a great hope for the future because I think that it paves the way for peace. It paves the way for peace between Israel and the Arab states although it will take time and it normalizes gradually. But I think ultimately it will help us reach peace with our Palestinian neighbors if they decide to embrace peace instead of trying to squeeze Israel into impossible conditions that won’t allow it to effectively survive here.

I am sorry to say that we don’t see this attitude on the part of the Palestinian Authority and I think countries have to stand up and tell them, cease what you are doing. Especially the chocking of Gaza right now which could lead to very difficult consequences. I know Angela that you are committed to a secure and stable Middle East. I think the strong ties between Israel and Germany can provide an example to this region and to the rest of the world. We overcame the horrors of the past. We never forget them, we never forget, and you will never forget, but we have transformed our relationship into a warm and constructive friendship.

It doesn’t mean that we don’t have disagreements, we occasionally do, but there is an underlined commitment that I respect and appreciate and I think that you exemplify. And there is something else, there’s this newfound cooperation that opens tremendous vistas into the future. I think the example of Israel and Germany offers hope for all the people of the world. It shows how we can transform history and come together to build a better and safer world.

I want to thank you again Angela for your friendship and for your leadership. And I want to see the next visit with an even larger delegation of Israeli entrepreneurs, men and women, in Berlin. Thank you.”

In response to a question about Gaza, Prime Minister Netanyahu said [translated from Hebrew]:

“The situation in Gaza may be divided in two. First of all, here is, of course, the permanent effort by Hamas to arm itself and organize against Israel but what really adds to this is the second component. The second part is, of course, that in the last year Abu Mazen has made the situation in Gaza more difficult by choking off the flow of funds from the Palestinian Authority to Gaza. As a result of this chokehold, pressures have been created there and as a result of the pressures, from time to time Hamas attacks Israel at a relatively low intensity but the chokehold is tightening.

Abu Mazen has interfered in all UN attempts to ease the plight in Gaza, including now and, of course, many countries, today I can say that even he donor countries, are condemning him for this, and rightly so.

On the other hand, if Hamas thinks that as a result of this plight it can attack Israel – it will be making a very major mistake. Our response will be harsh, very harsh. I hope that it is possible to halt this strangulation but I also reiterate that Israel will act with all necessary strength to defend itself and its citizens.”