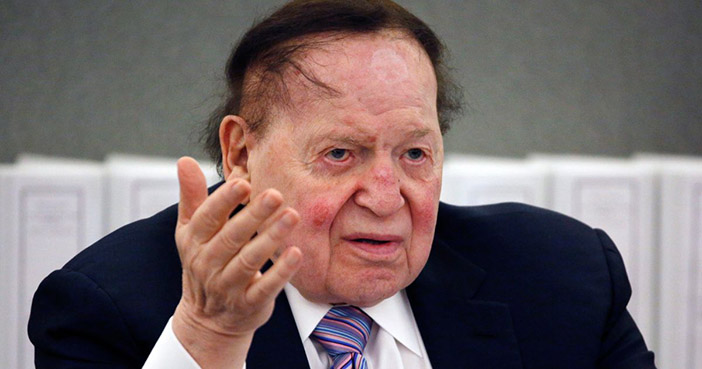 Democratic group claims lawsuits ruined them, aims to take revenge on Sheldon Adelson–despite the fact that he paid their legal costs

A group that once was the umbrella for Jewish Democrats claims it was brought down by a libel lawsuit filed against it by Sheldon Adelson and is countersuing now that Adelson has lost.

The lawsuit, filed Tuesday in a federal court in New York by the National Jewish Democratic Council and its former chairman, Marc Stanley, charges the casino magnate with “legal sadism” for pursuing his lawsuit first launched in 2012, despite multiple losses in lower courts, until a federal appeals court threw it out last November.

“It is now beyond civil that Sheldon Adelson deliberately abused the courts to try — in his words — to bankrupt the National Jewish Democratic Council for having the temerity to criticize him,” the lawsuit claimed.

Adelson has already paid legal costs to the defendants after losing his lawsuit.

However, the group seeks damages under a statute in Nevada — where Adelson originally filed his lawsuit — that penalizes frivolous lawsuits. The filing does not name an amount but seeks damages to be determined at trial and punitive damages.

The lawsuit claims Adelson essentially ruined NJDC, driving away donors who were wary about being named in a lawsuit. Its then-director, David Harris, left the organization and politics because of the action. “Today, the NJDC exists only to recover its debt from litigation and pay its bills,” it says.

A new group, the Jewish Democratic Council of America, was established last year in its stead.

Adelson had sued the National Jewish Democratic Council in 2012 over an online petition alleging the major Republican donor allowed prostitution at his casino in Macau. The petition included a hyperlink to an Associated Press article carrying allegations against Adelson. Much of the legal argument was over whether attaching a hyperlink is a clear enough signal that the defendants were citing available information.

The hyperlink was embedded in an online petition urging Republicans not to take money from Adelson, who in addition to being a major giver to the Republican Party also funds Jewish, pro-Israel and medical philanthropies.

A spokesman for Adelson did not respond to a JTA request for comment.

Adelson is a major supporter.