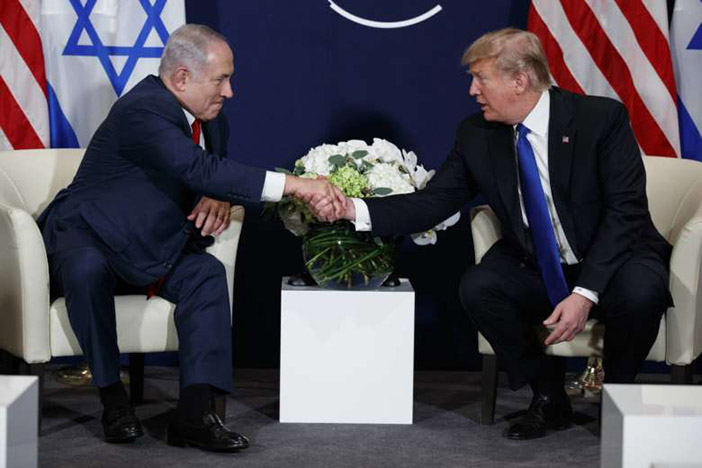 A new 25-nation Pew survey revealed that while Trump’s international image has suffered, his ratings among citizens of the Jewish state remain high.

While a summary of the results described “widespread opposition to his administration’s policies and a widely shared lack of confidence in his leadership,” the poll demonstrated that the U.S. president enjoys a 69 percent positive rating in Israel, up from 56 percent in 2017.

The summary attributed this jump to the Trump administration’s decision to move the U.S. Embassy from Tel Aviv to Jerusalem, Israel’s capital.

In addition to the embassy move, Trump has also taken a number of other steps aimed at incentivizing Palestinians to work toward a peace deal with Israel, including ending financial support for their United Nations agency (UNRWA) and vowing not to extend any more aid until the Palestinians return to the negotiating table with Israel.

The poll also showed that Israelis, along with Nigerians and Kenyans, are “particularly likely to think the U.S. is more important than it used to be.”

In comparison to Barack Obama, Trump received substantially higher ratings than his predecessor got near the end of his second term, “although they are very similar to the high ratings for Obama in 2014, before tensions rose between his administration and Netanyahu over the Iran nuclear deal.”

The poll summary explained, “As has been the case in recent years, around eight-in-ten Israelis express a favorable opinion about the U.S. At 52%, Israelis are more likely than any other public surveyed to say the U.S. is doing more to address global problems than a few years ago. Israel also tops the list in terms of the share of the public (79%) saying that relations with the U.S. have improved in the past year.”

Notwithstanding strong criticism from nations such as Russia and Germany, “[O]n balance the U.S. still receives positive marks – across the 25 nations polled, a median of 50% have a favorable opinion of the U.S., while 43% offer an unfavorable rating. However, a median of only 27% say they have confidence in President Trump to do the right thing in world affairs; 70% lack confidence in him.”