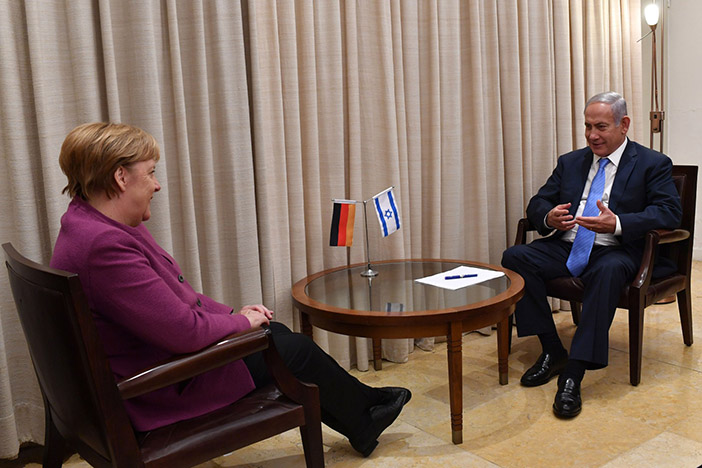 Prime Minister Netanyahu and German Chancellor Merkel held a meeting with their entourages as part of a working dinner at the Residence.

The inter-governmental consultations will focus – inter alia – on security, scientific, economic, cultural and cyber cooperation. There will also be a series of discussions and the signing of MOUs the goal of which is to strengthen bilateral relations.

The following will be signed:

* An MOU (Memorandum of Understanding) between the Social Equality Ministry and the German Commission for Culture and Media on loaning the Gurlitt collection to the Israel Museum in 2019. The MOU will focus on advancing the procedures necessary for displaying the collection in Israel.

* A declaration of intent between the Ministry of Economy and Industry and the German Ministry of Education and Research on European and bilateral cooperation on research and development, and innovation: Exchanges of information on technology and advancing joint projects mainly in artificial intelligence, cyber defense and nanotechnology.

* A declaration of intent between the Science and Technology Ministry and the German Ministry of Education and Research on scientific cooperation in electrochemistry, oceanographic research, cancer research and water technologies by encouraging cooperation between Israeli and German scientists.

* A declaration of intent between the Finance Ministry and its German counterpart on establishing an economic dialogue: The ministries will exchange information and hold consultations on the issues of economic analyses and financial system technologies.

Since the 15 February 2016 inter-governmental (G2G) consultations in Jerusalem there has been significant progress in various fields including security, trade, culture and community affairs.