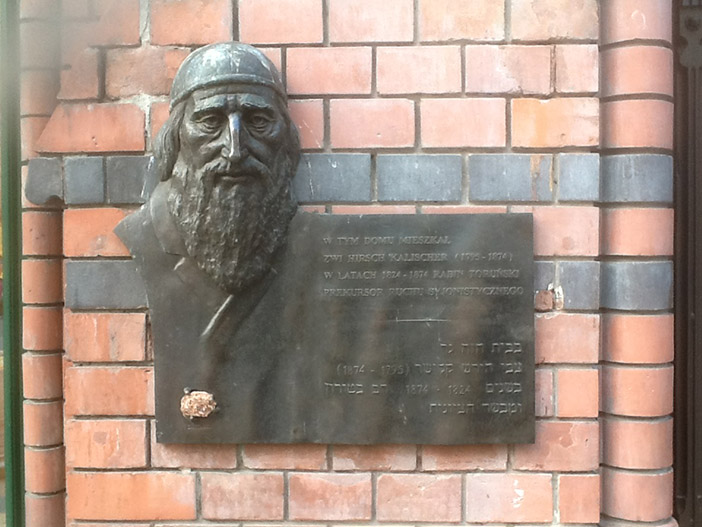 This medieval town located in northern Poland is the birthplace of the famed astronomer Nicolaus Copernicus, is also known for their gingerbread making as well as being one of the few Polish cities to escape major damage in World War II. The city earned its UNESCO status for its preserved street pattern and medieval brick buildings. Torun — about halfway between Warsaw and Gdansk — is also called ‘Krakow of the North’ for its charm and is one of the most important and crowded tourist centers, right after Krakow; it also has the richest of original and best preserved historical monuments in Poland. This magnificently walled Gothic town on the Vistula should be high on every traveler’s list. 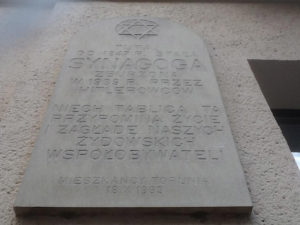 Torun, Poland: Memorial plaque on the site of a former synagogue destroyed by the Nazis in 1939 – New York Jewish Travel Guide

The Jewish Community of Torun started at the end of the 18th century with only three Jews living in the town: a teacher, a kosher butcher and a cook. After Torun reverted to Poland in 1920, the local Jewish population became one of the smallest in Polish town numbering 354 in 1925. On the outbreak of World War II there were about 1,000 Jews in Torun. Some of them did not engage in Jewish organizations or in the life of the community. The changing geopolitical situation and demographic conditions at that time caused the Jewish community to systematically drop in numbers. Some left, while others decided to assimilate within Polish society.

This small town was influenced by the presence of Rabbi Zvi Hirsch Kalisher, an Orthodox German rabbi born in 1795 in Lesano, Prussia (now Leszno, Poland) who was considered to have been one of the most important pioneers for the foundation of modern Zionism. He expressed views, from a religious perspective, in favor of the Jewish resettlement of the Land of Israel. As an adult, he settled in Torun and spent his life there, serving for 40 years as “acting rabbi.” He did not receive any remuneration for his work but was supported by his wife, who ran a small shop. In 1862, he published “Drishat Tzion” and wrote: “When we redeem the land, we make a pathway for our God and a kalischer way towards final redemption.” A street is named after him in Tel Aviv off of HaCarmel Street as well as a religious kibbutz in the Bet She’an valley called Tirat Tzevi. An Israeli postage stamp was also issued in his honor in 2008. In Torun, there is a plaque commemorating him on the wall of the building where he used to live at 46 Szeroka Street. 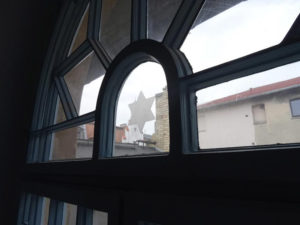 There was a synagogue that was situated ul. Szczytna 12 that was built in 1847 and used by the local congregants as a space for prayer. Unfortunately, the synagogue was destroyed by the Nazis during the war and was the only building that was destroyed. The city of Torun’s coat of arms displays a gate protected by the angels, who perhaps were looking out for the city during this time. A commemorative memorial plaque now marks the former synagogue space.

Visitors will also find an interesting house in the middle of town that was occupied by the Lachmann family. In this building a Jewish star remains inside by the window stairwell. This home is now a regular rental apartment complex. The Lachmanns were traders of corn and wool with Russia and Germany and moved to Hamburg more than 120 years ago. NYJTG was fortunate to have Mr. Szymon Wisniewski, director of the Tourist Information Center, share the house’s details during a recent tour. 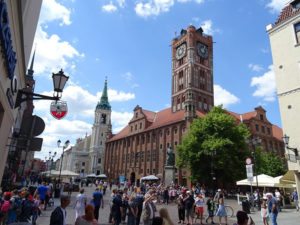 But Torun has a great deal more to offer visitors. Torun oozes medieval charm and it is hard not to feel like you’re visiting a different century. In 2016, the city attracted a record number of almost two million tourists.

Enjoy walking through the delightful sights of Torun. One could easily spend a full day of solid sightseeing here…if you have time, two or three days would be well spent there and will pass very quickly.

Old Town Square. As is the way in Europe, the Town Hall, located in the center of the Old Town Market Square, is the focal point for Torun and a perfect place to start your visit. It is the most important building in Torun, dating back to the late 14th century, where you will find some of the most beautiful buildings in the city, such as the Postal Building and the Arthus House. 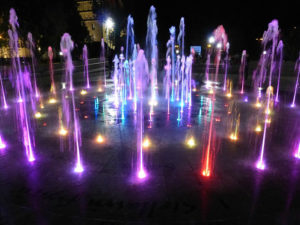 Capture the monuments. There are plenty of statues and monuments throughout the Old Town of Torun and most come with a legend or story, such as the dragon of Torun that was apparently spotted by a couple in 1746. The torture wooden donkey directly across from the Copernicus statue shows a painful contraption used to torture and humiliate the criminals who were forced to sit on it before being whipped.

Keep your eyes open in the town center! My favorite is the statue of Filus, an adorable puppy with a hat in his mouth known from a popular Polish comic strip. It is in honor of the Polish cartoonist Zbigniew Lengren, whose well-known comic series involved Professor Filutek and his dog, Filus.

One of the cute little spots in the Old Town Market Square is the Frog Fountain. The fountain tells the story of Torun’s own version of the Pied Piper. The statue at the center is of Janko Muzykant, who saved the town from a plague of frogs, by playing his fiddle and luring them to the forest. 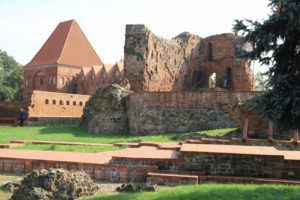 Cosmopolis fountain show. Each evening, at the Cosmopolis Fountain just outside of the Old Town, there is an impressive light and sound show. While it isn’t a large or spectacular multimedia fountain, it is definitely worth seeing while in Torun. The times vary depending on the season but will start once it gets dark and continue until midnight. Another reason to love it: it’s among the many free things to do in Torun.

Visit the Gingerbread Museum. The city is well-known for the tradition of gingerbread making and this museum has a really fun and interactive show that shares the secrets of Torun’s gingerbread with visitors. This is one of the most popular — and definitely one of the most memorable — things to do in Torun. The baking of gingerbread has been part of the city’s culture since as far back as the 14th century and the baking tins and molds themselves were works of art. 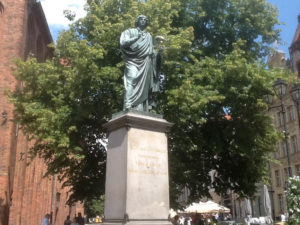 Explore the castle ruins. East of the remnants of the Old Town walls are the ruins of the Teutonic Castle, destroyed in 1454 by angry residents of the city protesting against the knights’ oppressive regime. Although much of the castle is in ruins, there are some really well-preserved parts, including a bridge and a tower to see. The ruins of the Teutonic Castle is listed by the UNESCO organization.

Lean against the leaning tower. An important landmark and must-see is Torun’s own Leaning Tower. It’s a medieval tower that shifted over time. Instead of walking up it like in Pisa, you stand at the base of the wall with your legs together and arms outstretched in front of you. Local superstition claims that if you can balance longer than five seconds, then you are considered unfaithful to a partner!