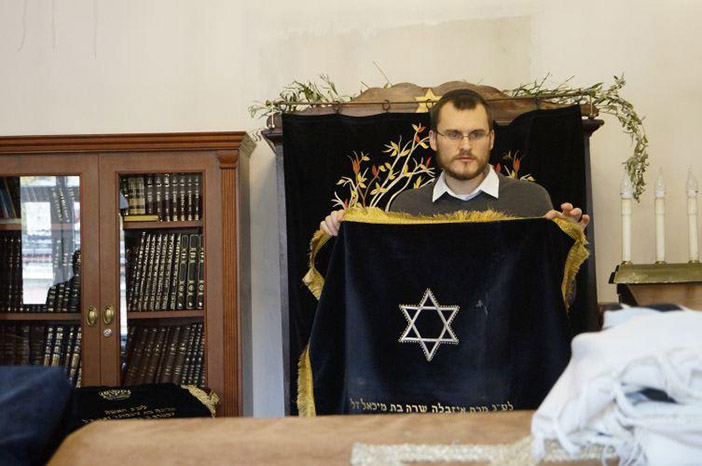 Rabbi Dawid Szychowski is the Lodz Jewish community’s spiritual leader. He was appointed emissary by Shavei Israel, an Israeli organization that encourages people with Jewish ancestry to strengthen their connection with Israel and the Jewish people. Originally from Poland, Rabbi Szychowski moved to Jerusalem to continue his rabbinic studies at the Machon Meir yeshiva. He received his rabbinic ordination in 2015, first from Rabbi Yakov Peretz of the Beit Midrash Sefardi and then from Rabbi Shlomo Riskin at Yeshivat Hamivtar in Efrat. He completed the two-year Beren Strauss Amiel program preparing future rabbis to work with Jewish communities outside of Israel. He also participated and lectured in several of Shavei Israel’s summer seminars in Israel for young Polish Jews. Chief Rabbi Michael Schudrich of Poland asked him to move to Lodz to fulfill a great need there; his responsibilities included visiting both Katowice and another two Polish cities with smaller Jewish communities.

New York Jewish Travel Guide sat down with Rabbi Szychowski to explore the challenges and opportunities faced by the Jewish community of Lodz. The following interview is edited for clarity and length.

NYJTG: Rabbi, can you tell me about yourself and where are you from? 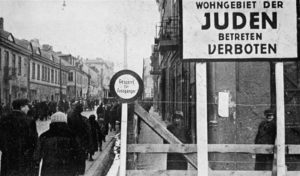 The city of Lodz is located about 75 miles southwest of Warsaw, Poland. The Jews of Lodz formed the second largest Jewish community in prewar Poland, after Warsaw. German troops occupied Lodz one week after Germany invaded Poland on September 1, 1939. Lodz was annexed to Germany as part of the Warthegau. The Germans renamed the city Litzmannstadt, after a German general, Karl Litzmann, who had captured the city during World War I.

Rabbi Dawid Szychowski: I was born in Poland, in Biała Podlaska, in a non-religious family. In my family, there was a story about my grandmother that she is Jewish…. But then I went to study in Krakow and I was trying to be in touch with the Jewish community in Krakow and started to be observant and then I realized that with my Jewish roots, it’s quite complicated because there are no documents, so I had to go through a conversion process in Israel. But my family is also trying to be in touch with Yiddishkeit. My brother is in touch with the Warsaw community and so there is a story in my family, so my identity is based on this story.

NYJTG: So, how did you find about this conversion process? Did you research it?

Rabbi Dawid Szychowski: It was a story in my family. I was in contact with the rabbi in Krakow as I was trying to become observant. Because you have to have some documents [proving your Jewish genealogy]. About the story, the story is OK for me, but to the Jewish world, no. I tried to research on my own and I didn’t succeed in getting any documents; however, it was quite a story from my searching…similar to the story that I was told by my family. So I started going to the synagogue and to develop my identity.

NYJTG: So, you didn’t grow up religiously? Where did you study to become a rabbi?

Rabbi Dawid Szychowski: No. I started to be. I was looking for it and that’s why I went to study philosophy at university in Krakow and studying with my rabbi. Then I went to Jerusalem to study…. I sensed a very deep connection. A connection to my soul, to my intellectual side, and I found this attractive. Then I started to work through ups and downs…. I studied in Jerusalem to become a rabbi for six years [along] with my studies with my previous rabbi, nine years. But I had to start from the ground, from the base.

NYJTG: What is your function and role as rabbi in Lodz? And how many Jews are living here?

Rabbi Dawid Szychowski: There are many duties from all the aspects of Jewish life. There’s tefillot-services, kosher food, marriages, funerals and so on. First of all, I have to attend these functions. I have to give people…this religious side of life. I am also a psychologist. This is the work of a rabbi. I have to speak with people in order to help them so it’s quite similar to psychology.

There are rumors that there are about 2,500 Jews and when I go for a walk, I often stop by to read some the names and I found a lot of Jewish names on the intercom or on the people’s homes…There is some sense of connection in the Jewish people that they belong to a community. And there are 100 active members, but not active on a daily basis because the Jews here are scattered all around Lodz. Some of them are older people, so they have difficulties to come here each day for the morning services, only on Shabbat and holidays. In reference to their religious affiliation and observance, I don’t know their level of observance, but they want to be in a Jewish Orthodox community with an Orthodox rabbi.

NYJTG: Do people come by and say “Rabbi,” I want to convert or would like to learn more about my Jewish heritage?

Rabbi Dawid Szychowski: First, I gave some lectures to encourage them, I have to speak with them and to make them feel closer to Yiddishkeit. Each person has their own way, so I have to speak at their level and language. It depends on the person. You have people that came here, and they are discovering their Jewishness and I try to reach out to them. I want to make some partnerships also and lectures with the Marek Edelman Dialogue Center. We also try to have some open lectures for the people of Lodz because there is also a very important task for the Jewish community in the diaspora to talk to non-Jews because they are very interested in what Jews, what Yiddishkeit, have to say about life, war, ecology, about politics. Because of Israel, they want to know what wisdom was imparted to Jewish people that they came back to this land with after 2,000 years. They were very much interested, so this is a very important task.

NYJTG: Do you give lectures at this synagogue or classes about Jewish culture? How large is the attendance? 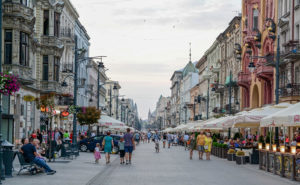 The modern city of Lodz in Poland

Rabbi Dawid Szychowski: Yes. Here and in other places the attendance is sometimes 300. Sometimes 15, sometimes 50. I also go to many other cities and gave lectures basically for the non-Jewish people. It’s education for the next generation. They are educational classes about Jewish culture and history and so on. It’s very interesting, and we often enter into difficult subjects such as Polish-Jewish relations… And here, for example, we want to make in July, for the Fourth of July, Independence Day of the U.S., we want to make a Hasidic Tisch…. We want to claim and to make the Hasidic Tisch open for non-Jewish persons…. Then, the non-Jewish and Jewish can meet based on Hasidic thought, Hasidic text, Hasidic dances….

We also had seminars here. We spent one week in Israel and one week here with an organization called Elul. Because we had to pay for it, it was a pilot or start-up investment, it was 10 people that learned to be “madrichim” (coordinator or teacher). These people have knowledge of Judaism, but we want to open the doors to people that …don’t have knowledge and our goal is to bring Moshiach because if non-Jewish people want to know Jewish wisdom, we must answer them.

NYJTG: To move to a different subject and more specifically on kosher food, how difficult is it to keep kosher?

Rabbi Dawid Szychowski: We have kosher meat you can buy…there is ‘Shechita’ in Poland. There are many places so that is no problem. Also, fish, vegetables. That’s no problem. We have a kosher bakery also, but no kosher store in Lodz. Just a bakery. The mashgiach from our kitchen he’s turning off the oven. There are no restaurants here or kosher stores. There is a kosher list from Chief Rabbi Michael Schudrich of Poland, he worked 10 years or more to have a kosher list of products that you can buy in the supermarket. He did a lot of research and it’s on their website.

Rabbi Dawid Szychowski: I don’t know because it’s difficult. It’s a decision of people and God, so I don’t know. Maybe next month it will be such a good atmosphere in Lodz that Jews would come here and try to start Jewish life, but I don’t know. But, the hidden …2,000 Jews in Lodz, I don’t know if they will come here because the life is far from Jewish life. Obviously, I will try to reach them and to bring them here, but I think the future of the Jewish community is in the diaspora based on shlichim [emissaries] from Israel. They will come here for a certain period to be here and to teach other people to complete the shlichut and then go back to Israel.

I don’t know if you understand me because, for example, there are people now on vacation from Israel who want to come here to volunteer for a period, maybe to teach Hebrew to other people, I think that is the future of our Jewish community. There are students. There are people that want to come here and to volunteer. In the younger generation in Israel, there is a will to come to Europe, to Poland, to discover their Jewish roots to make something of this… We must build based on them. But there are two different levels because Jews from Poland stayed here, they are in the second exile. But the Israelis that came here, they are in the third exile so there are some different levels and they have some difficult and different experiences and different targets.

NYJTG: Is there any anti-Semitism here?