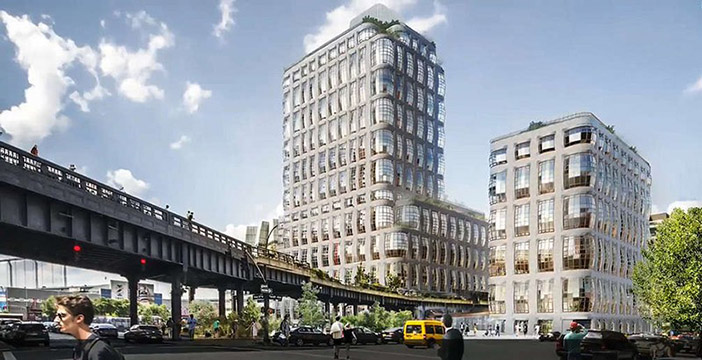 Related Companies will soon have two more retail spaces right across from their project right by the High Line.

The Real Deal reviewed records showing a lease for the commercial condo units at 505 W. 19th St. signed on June 13, a building managed by HFZ Capital Group and Carlyle Group.

Related is getting in on the future that’s expected in the area from the Hudson Yards mega-project with a condo tower that’s right across the street from the newly leased spaces.

The building will be at 515 W.18th St., and go by the name of “Hudson Residences,” referencing Hudson Yards and Hudson River. The tower is expected to contain 180 apartments. Related’s designer also designed the “Vessel,” a quirky art installation that also serves as almost a playground and opportunity for some exercise and sightseeing.

While it could be beneficial to have the new properties across the street from the apartment tower, Related has yet to specify what they will do with the space it just leased. Representatives for Related and HFZ did not return requests for comment to The Real Deal.

Related could try something it already did by using the leased space as a facility used to preview and sell the condos. One possible use for the space is a sales gallery, which the company often opens next to its condo projects.

The leased space has commercial potential too because the building it’s in uses its 10-stories to house 31 luxury condos that Thomas Juul-Hansen designed. HFZ and Carlyle went separate ways with the property last year. Part of the agreement left Carlyle with four unsold units in the building that it purchased at a cost of $44.1 million, and it didn’t take long for Carlyle to relist the apartments.

The official Hudson Yards website describes the massive, decades-spanning project as “the largest private real estate development in the history of the United States and the largest development in New York since Rockefeller Center. The site will include more than 18 million square feet of commercial and residential space, state-of-the-art office towers, more than 100 shops including New York’s first Neiman Marcus, and a collection of restaurants curated by Chef Thomas Keller. The urban development will include approximately 4,000 residences, The Shed, a new center for artistic invention, 14 acres of public open space, a 750-seat public school and an Equinox Hotel with more than 200 rooms—all offering unparalleled amenities for residents, employees and guests. The development of Hudson Yards will create more than 23,000 construction jobs.”

The site continues by going into some detail about how it took a large group of people with all different skill sets coming together to make this project possible.