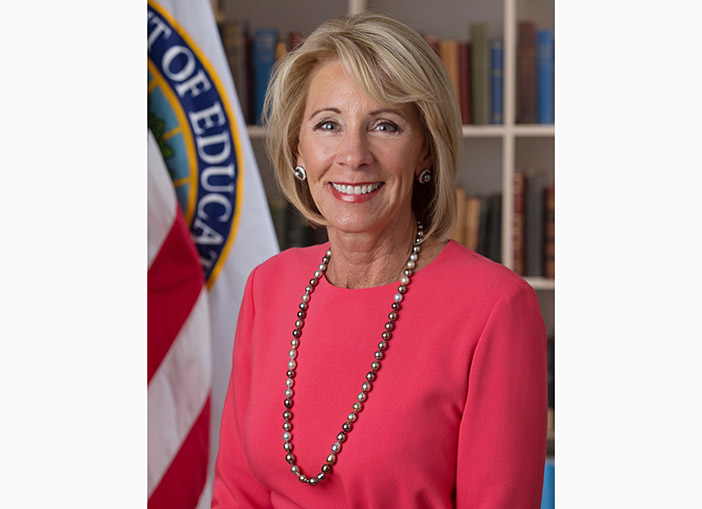 According to a New York Times report, Education Secretary Betsy DeVos has contemplated an unprecedented measure that would permit states to use federal education funds to purchase firearms for teachers. This plan would conceivably be realized through grant program called the Student Support and Academic Enrichment Program. The report cited multiple people with knowledge of the plan.

School shootings have been a pervasive phenomenon in the last two decades and has ben spotlighted once again when earlier this year, 17 students were murdered by a fellow classmate at the Stoneman Douglas high school in Parkland, Florida.

If Ms. DeVos should be successful in implementing such a plan, it would contravene a long-standing government policy not to supply money to outfit schools with weapons.

Reports indicate that Ms. DeVos is said to be considering a loophole in a law that was intended to increase academic opportunities. The law does not prohibit weapons purchases.

In March, Congress passed a school safety bill allocating $50 million a year to school districts but that money cannot be used to buy firearms.

The Trump administration, however, is denying the veracity of the New York Times report.

The official added that DeVos thinks that Congress should take action to clarify whether or not using the grant funding to buy guns is permissible. Moreover, the Education Department believes the grant program is intentionally vague to give school districts flexibility, and the idea of purchasing firearms was likely not considered when it was written, according to the official.

In response to the Times report, Education Department spokeswoman Liz Hill told CNN that “the department is constantly considering and evaluating policy issues, particularly issues related to school safety. The secretary nor the department issues opinions on hypothetical scenarios.”

Former Congresswoman Gabrielle Giffords said in a statement Wednesday that “arming teachers is not a solution.”

“It recklessly puts American children in even more danger,” she said in response to the Times report. “It’s time for Americans to find the courage to take on the powerful and fight for our own safety.”

in March, the Trump administration proposed providing some school personnel with “rigorous” firearms training, according to the CNN report.