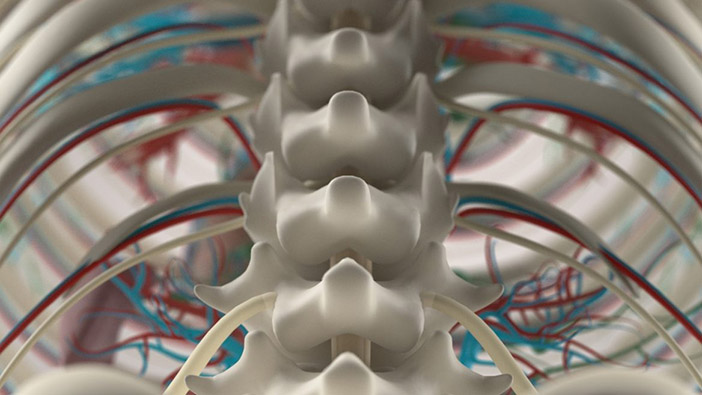 An Israeli study shows great promise for improving the outcome of spinal-cord injuries, which often cause permanent changes in strength, sensation and other body functions.

In experiments with mice, scientists from Tel Aviv University found that injecting a potent enzyme hours after spinal injury can put the brakes on a cascade of pathological events responsible for neuronal death, such as inflammation and scarring.

“Primary mechanical damage to spinal-cord tissue kills a certain amount of neuronal cells. But there’s secondary damage due to the release of excess glutamates, which are responsible for additional functional disability,” explained Dr. Yona Goldshmit of TAU’s Sackler Faculty of Medicine and the Australian Regenerative Medicine Institute, Monash University.

“The main idea is to reduce the secondary damage as soon as possible — to block the body’s natural reaction to spinal cord trauma. This is the role of the enzyme injection we devised,” he said.

Goldshmit conducted the study with TAU colleague Dr. Angela Ruban, who worked with the late Prof. Vivian I. Teichberg of Israel’s Weizmann Institute of Science to develop the “blood glutamate scavenging approach,” a treatment based on controlling the levels of glutamate in patients with diseases including glioblastoma and ALS.

For the present study, Ruban and a research team including Weizmann staff scientist Ghil Jona studied the neuroprotective effect of blood glutamate scavengers in mouse models of spinal-cord injury.

“Our new treatment aims to lower levels of glutamate, which is released in toxic quantities after trauma, by intravenous administration of blood glutamate scavengers,” she said. After receiving the treatment for five consecutive days, the mice significantly recovered from the injury.

“The treatment increased the survival of neurons at the lesion site and enabled axonal regeneration into the injury site, which resulted in significant functional recovery compared with the untreated mice,” Ruban said.

“This indicates that drug intervention with blood glutamate scavengers following spinal cord injury may be neuroprotective and may create a regenerative environment.”

The blood glutamate scavengers injection could be administered immediately after an accident without first confirming a diagnosis of spinal-cord injury.

“Our takeaway is, ‘Don’t wait to diagnose it, treat it,’” Ruban said. “It’s similar to aspirin, which can rescue a cardiac patient from irreversible damage if taken within the first few hours of a heart attack. We suggest administering the injection even in cases of uncertain diagnosis. There’s no side effect to the injection, but it might just mitigate secondary damage and dramatically improve the quality of a person’s life.”

“If we manage to reduce the amount of glutamate that is released initially, we can moderate the inflammation and scarring, thereby moderating the damage to the tissue and enabling neuronal cells to survive,” Goldshmit added.

The study was published in May 2018 of the Journal of Neurotrauma and was co-authored by TAU neurobiologists Eran Schmukler, Shira Solomon and Ronit Pinkas-Kramarski.

“When this new treatment will be available to paramedics, the consequences of injuries could be dramatically reduced,” Ruban concluded.