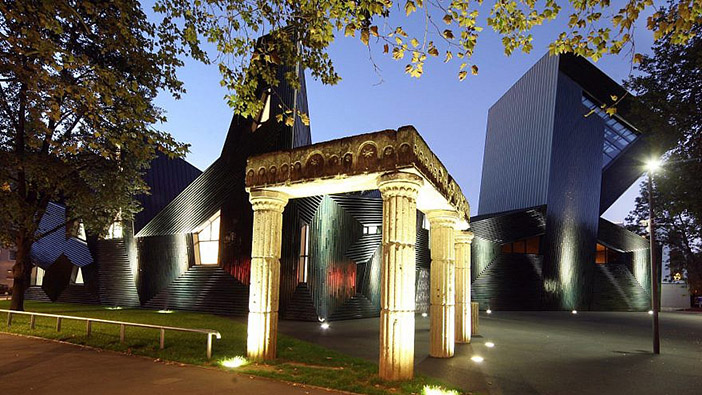 In Mainz, a German city where a Jewish schoolgirl was recently murdered, attempts are underway to recognize its former Jewish glory

In recent months, the Rhine city of Mainz captured worldwide headlines for the murder and rape of one of its Jewish members, 14-year-old Susanna Feldmann, allegedly at the hands of an Iraqi asylum-seeker, now in German custody. In the news coverage of Susanna’s murder and the ensuing heated parliamentary debate over Germany’s refugee policy, few pointed to Mainz’s significance as the cradle of Ashkenazi Jewry.

“Mainz is one of the most important towns in Europe for Jewish culture,” said Peter Seelmann, a tour guide for the city, the center of which is dominated by the Mainz Cathedral. “Already in Roman times, we contend there was Jewish life here.” 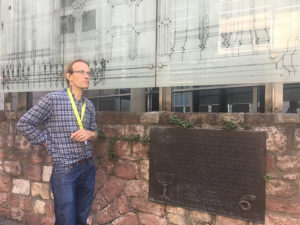 Mainz tour guide Peter Seelman stands next to a memorial plaque for the Jewish community of Mainz. Credit: Orit Arfa

During the 10th and 11th centuries, Jews were granted permission to settle, live and, ultimately, thrive in Mainz, a former Roman garrison city, as well as in the neighboring riverside towns of Speyer and Worms. At its peak, Jews accounted for about 10 percent of Mainz’s population. Today, of Mainz’s 200,000 residents, some 38 percent are Catholic, 23 percent are Protestant, 5 percent are Muslim and .5 percent are Jewish.

The acronym for the three cities is “ShUM,” meaning “garlic” in Hebrew—the symbol of medieval Ashkenazi Jewry. A medieval code of Jewish statues, “Takknot ShUM,” set a standard for Jewish life in Christian Europe. Efforts are now underway to designate the ShUM cities as a UNESCO World Heritage Site, which should boost Jewish tourism to the region and awareness of its Jewish importance.

In the 1990s, after the fall of the Iron Curtain, Germany opened its doors to Jews from the former Soviet Union, a gesture to ensure that Hitler did not succeed in making Germany “Judenrein.” Anywhere from 100,000 to 200,000 Jews immigrated to Germany with an easy path to citizenship. For those inquiring about the Jewish population of small German cities and towns, chances are the residents will speak Russian, like Susanna Feldmann’s mother, Diana, who came from Moldovia. Most are marginally affiliated, in part due to communism’s suppression of Judaism. 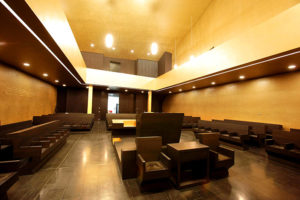 The inside of the new synagogue in Mainz, Germany. Credit: Sascha Kopp via Mainz Tourism Office.

A Jewish tourist would be hard-pressed to find a local Jewish tour guide in Mainz. A few weeks after Susanna’s murder, the rabbi of the Mainz Jewish community politely declined to be interviewed. Offices of the Jewish community did not return a call.

So Seelmann, a German atheist married to an Italian Catholic, was left to show me the Jewish sites, of which few are left. Throughout the historic city center, plaques commemorate the former synagogues and ghetto. The State Museum of Mainz exhibits the oldest Jewish tombstone in Europe, dating to 1049. The Mainz Jewish community suffered its first major decline during the 1348 Black Plague, for which the Jews were blamed. The Nazis wiped out whatever community and institutions still existed.

Modern homage to the significance of Jewish Mainz is its new synagogue, inaugurated in 2010 on the site of the elaborate 1922 synagogue destroyed by the Kristallnacht pogroms. The replacement synagogue’s bombastic, sculpted silhouette reads kedusha, or “sanctification,” and bears the name “Light of the Diaspora,” after the nickname of the 11th-century Jewish sage, Rabbi Gershom ben Yehuda, who established Mainz’s reputation as a Jewish spiritual center.

“It’s a symbol of Jewish life in Mainz,” said Seelmann. Its architect, Manuel Hertz, was as student of the Jewish Polish American architect, artist and professor Daniel Libeskind. As a teacher of architecture history, Seelmann lamented that the impressive interior is usually closed to the public.

“The Jewish community doesn’t want at the moment guides who are not Jewish making tours in the synagogue,” said Seelmann. When he buzzed the intercom, a woman said in a Russian accent that she couldn’t let us in because she was alone. 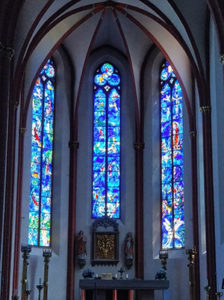 St. Stephen Church in Mainz, Germany: Biblical stain-glassed windows designed by Marc Chagall. The Jewish artist once vowed never to produce artwork for Germany, but a friendship he had developed with its priest, whose father was a local Jewish merchant, inspired him otherwise. Credit: Orit Arfa.

Mainz Jewish resident Konstantin Dulin, 26, came in 1999 from Ukraine. He and his wife are among a handful of Shabbat-observant couples. He generally doesn’t pray at the synagogue because as a liberal one, it doesn’t have a mechitza (a separator for men and women worshippers). Its glorious proportions don’t necessarily justify the community’s scope of activity.

“There are not enough people for whom Judaism is important,” Dulin said in a phone interview.

The major public Jewish “highlight” can actually be found at the St. Stephen Church: Biblical stain-glassed windows designed by Marc Chagall. The Jewish artist once vowed never to produce artwork for Germany, but a friendship he had developed with its priest, whose father was a local Jewish merchant, inspired him otherwise.

A Tour of ShUM Cities

For a more comprehensive tour of remnants of the “SHum” cities, one would be advised to visit Speyer and especially Worms, best in conjunction with a visit to Frankfurt, which is a 40-minute train ride from Mainz.

The Jewish museum at Worms is named “House of Rashi” after the famous exegete who spent some years studying there. While Rashi spent most of his life in Troyes, France, his name was adapted in part for marketing purposes, according to Stella Schindler-Siegrich, former head of the Mainz Jewish community (which technically includes Worms). 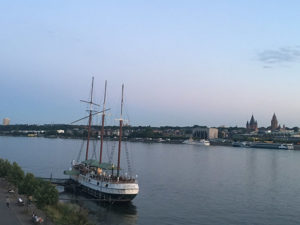 A view of the Rhine River. Credit: Orit Arfa.

Out of respect for the Feldmann family and for political sensitivity, Schindler-Siegrich declined to discuss the recent tragic events in Mainz and instead focused on the ancient sites.

“In the Middle Ages, Worms was a very important city because in Germany there was no major capital,” she said in Hebrew, which she learned living in Israel after making aliyah as a child with her family from Poland.

Jews lived in Worms mostly as merchants and traders, often serving the needs of bishops and royals. About 100 Jews reside in what today is a quiet, uneventful city.

The synagogue complex was restored in 1961 upon medieval stone remnants that survived Kristallnacht. The mikvah attests the fullness of Jewish life that once existed. The largest surviving Jewish remnant in ShUM is the sprawling Worms cemetery—the oldest extant Jewish cemetery in Western Europe.

During the day, children could be heard playing at a schoolyard neighboring the synagogue. It’s not a Jewish school; it consists mostly of students of Turkish descent. Some were caught throwing stones and acorns at Orthodox delegations, triggering uneasiness within the Jewish community.

The Future of ShUM

Dulin’s concern for the Jewish future of Mainz has more to do with a general lack of engagement in Jewish life than security. When he and his wife have children, they’ll probably move to a city with more robust Jewish institutions.

Given that, he said, the Russian-speaking population generally feels antipathy towards the Muslim community and refugees (one that he does not share).

“I know the older people were especially hurt [by the murder],” he said in Hebrew. “They took it as a threat.”

“I would not really link this whole story [of Susanna] to her Jewish heritage,” said Dulin. “As far as I know, she was not involved in Jewish life.”

His wife, who runs a Jewish youth group, once reached out to Susanna to join Purim festivities; she did not attend. But the moving memorial held after her murder, he said, brought the community together.

In the meantime, one more Jewish site has been added to the Mainz landscape: Susanna’s tombstone in the Jewish cemetery.