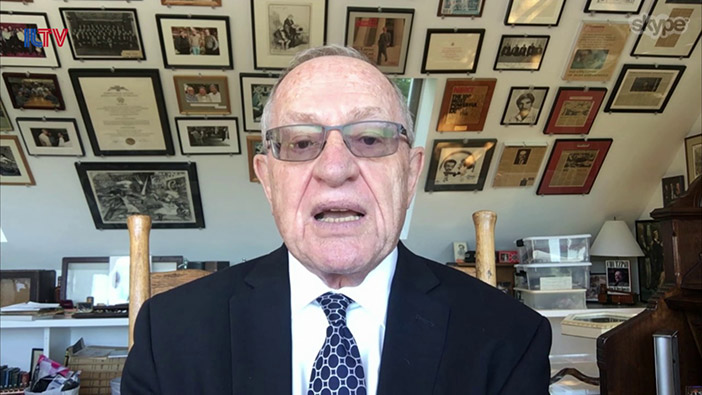 Dershowitz was incorrectly introduced as an adviser to President Trump in an interview on Britain’s Channel 4 News Wednesday. After he corrected the mistake he was asked, “where is the moral backbone of America these days?”

In response, Dershowitz cited the rise of Jeremy Corbyn, whose Labour Party won nearly 13 million votes in last year’s general election. Corbyn, who won control over the party in 2015, has been engulfed in a series of scandals revolving around accusations of anti-Semitism.

Earlier this week, footage was released showing Corbyn saying that “Zionists” did not understand British culture. Photographs released this week also revealed that Corbyn had hosted a gathering of radical Islamists–including members of the Hamas terror group–in Parliament.

“Where is the moral backbone of Great Britain to have as the head of the Labour Party a virulent anti-Semite, a virulent hater of Jews and the nation state of the Jewish people?” Dershowitz responded.

“Don’t lecture us about our political system as long as you have Jeremy Corbyn, who may potentially become the next Prime Minister of England. Shame on Great Britain for allowing that to come to pass.”

In a related development in the rise of European anti-Semitism, INN has reported that dozens of policemen and firefighters have converged on Jewish-French legislator Meyer Habib’s office in Paris after he received an envelope filled with white powder.

The envelope had arrived at Habib’s office earlier on Sunday and was opened by his assistant. After finding the white power with a threatening note, a wing at the Bourbon Palace was put under quarantine which has since been lifted.

The note said “stupid Jew, you will die and we will hurt you”.

Habib told the Behadrei Haredim website that such threats are not new. “This morning my parliamentary assistant opened the letter. He immediately called for security, they closed the wing where my office was kept for an hour, and carried out tests on the powder. The powder proved to be not dangerous,” said Habib.

“I’m used to it, it’s not new, there are pro-Palestinian groups and jihadists here who do not like what I do and represent, and they threaten me in different ways.”

Regarding security, Habib said that “I have security on me regularly, security is not reinforced after the letter, the French parliament will file a complaint with the police, they are already investigating other cases.”

Habib, formerly the Deputy Chairman of the French Jewish umbrella group CRIF (Conseil Représentatif des Institutions Juives de France), was elected in 2013 to the French parliament, the first time an observant Jew was chosen as a lawmaker.

Habib is close to Prime Minister Binyamin Netanyahu who endorsed his candidacy.