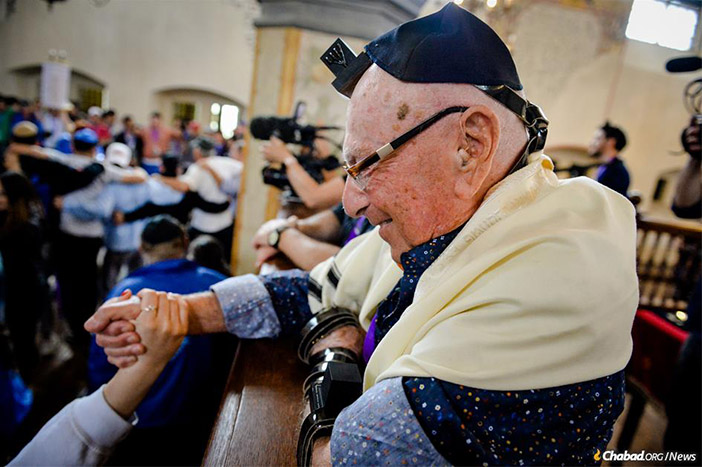 Johnny Jablon began preparing for his bar mitzvah in Poland in the summer of 1939. A month later, the Germans invaded. Now 92 years of age, Jablon returned to Poland for the first time since World War II to finally have his bar mitzvah.

Born the second of three sons to an assimilated Jewish family in Kraków, Jablon spent the first 11 years of his life fully integrated into Polish society. While many of the more traditional Jews lived in the Kazimierz district, the Jablons lived on a small suburban street next to Planty Park, the large garden that encircles Kraków’s old city where the city’s walls had once stood. 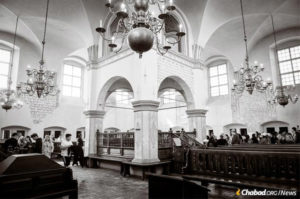 The bar mitzvah took place in the Tykocin synagogue, whose 4,000 members were murdered by the Nazis. (Photo: Ryan Blau/ March of the Living)

“Until the sixth grade, I spoke only Polish,” Jablon recalls. “I was the only Jew in my class. My classmates made that very clear to me—for six years they called me nothing but ‘Dirty Jew.’”

Despite the abuse, the Jablons considered themselves Jewish Poles, with an emphasis on being full Polish citizens.

In the summer of 1939, Jablon was learning to swim in Kraków’s new public pool and enjoying time with his aunt and cousins in a summer camp in Rytro, a resort town nestled in Poland’s Tatra mountains. His parents hired a rabbi to help him with his bar mitzvah studies. When the war broke out in September, his studies stopped, and the course of Jablon’s life was forever altered.

“In one day, I lost everything,” Jablon recalls. Instead of attending gymnasium as he had planned, Jablon spent the war years being shuffled from the Kraków Ghetto to the Płaszów, Auschwitz and Mauthausen concentration camps. When the war finally ended, Jablon had lost his mother, father, and brothers, as well as 16 aunts and uncles, and many more cousins.

Moving to Montreal, Jablon married, opened an electronics store and began a new life. He never planned to return to Poland. “How could I go back?” Jablon reflected. “I had no one left. I didn’t want to go to see the ashes of my family.” 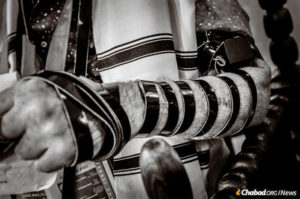 Jablon was was adamant at first about not wanting to put on tefillin. (Photo: Ryan Blau/ March of the Living)

Last May, when his wife Sally passed away, Jablon began to reflect on his life in Poland before the war. At the urging of friends, he decided it was time to finally return on a March of the Living trip to the country of his birth.

That’s when Jablon met Chabad-Lubavitch emissary Rabbi Pinny Gniwisch. The director of Chabad-affiliated Living Legacy in Montreal, Gniwisch has been leading March of the Living trips to Poland for the past 13 years. This year he served as the Montreal delegation’s official rabbi.

As the two met over lunch before the trip, Jablon mentioned his interrupted bar mitzvah.

“He was adamant at first about not wanting to put on tefillin,” Gniwisch recalls. The conversation turned to the subject of revenge.

“This is your revenge,” Gniwisch told him. “You owe it yourself to reclaim what was taken from you.” Jablon took to the idea. He was on board to wrap tefillin in Poland.

The bar mitzvah took place on Rosh Chodesh (the first day of the Jewish month) of the month of Iyar in the Tykocin synagogue, one of the few remaining historic synagogues in Poland. 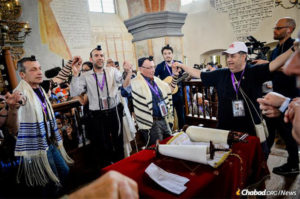 “I felt such a mixture of emotions. Everyone around me was crying. I felt so excited for the opportunity, and sad that no one from my childhood family child could see it.” (Photo: Ryan Blau/ March of the Living)

“It was surreal,” Gniwisch says. “We were in a shul that once had 4,000 members—all murdered in one day. Yet here it was, 79 years later, being used again, to help a survivor reclaim what was stolen from him.”

To Jablon, the bar mitzvah was the highlight of his trip.

“I felt such a mixture of emotions. Everyone around me was crying. I felt so excited for the opportunity, and sad that no one from my childhood family child could see it.”

After Jablon donned tefillin for the first time and was called to the Torah, everyone in the synagogue began to dance.

“That was something else,” Jablon says. “To see all the kids around me dance. That is how you fight anti-Semitism, by showing Jewish pride through education.”