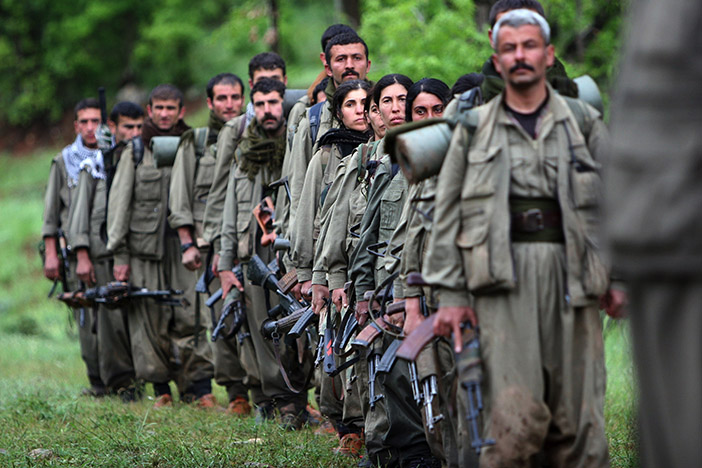 I recently noted 12 reasons why Turkey should be expelled from the North Atlantic Treaty Organization forthwith. I can now come up with a half-dozen more. Turkey under Erdoğan has transformed itself into the Sunni version of Iran. It is expansionist, having invaded two of its neighbors within the past two years; has little regard for human rights, little regard for press freedoms, treats the judiciary (which has been stacked with Erdoğan shills) as a tool of oppression and routinely snatches and detains foreign nationals on contrived charges for future bargaining positions.

But expelling Turkey from NATO is insufficient. The United States (I expect little from our craven NATO allies) can and must do more to punish Turkey for its outrageous, pariah-like conduct. First, working with Congress, President Trump should formally recognize the historic tragedy of the Armenian genocide, the systematic extermination of 1.5 million Armenians. The Turkish government has routinely denied its role in committing this genocide, disputing the numbers killed and perniciously claiming that those who were murdered or starved to death were simply casualties of war. Turkey must acknowledge its sole responsibility, and formal U.S. recognition of the Armenian genocide would provide the Turks with the necessary jolt.

Second, the U.S. should consider imposing a partial arms embargo on Turkey. Turkey is slated to receive the F-35 fifth generation fighter. That deal should be nixed immediately on humanitarian and security-related grounds. The F-35 contains top secret stealth and other technologies that must be safeguarded. The Turks have proven to be untrustworthy, having betrayed intelligence assets to Iran. Moreover, they’ve been caught red-handed transferring banned electronic components to the Islamic Republic. The embargo should also include restrictions on the sale of attack helicopters and spare parts for the Turkish air force, which is being utilized by the Turks to bomb and strafe Kurdish civilian areas within Turkey and Syria. In Afrin, the Turkish air force bombed militias allied with coalition forces in the fight against ISIS, without regard for U.S. concerns.

Concurrent with the arms embargo, the administration should increase military assistance to Greece, which is the recipient of frequent Turkish aggression in the form of ship rammings and airspace intrusions. We must ensure that Greece as well as Cyprus can defend themselves against Turkish expansionism in the Mediterranean. Recent gas findings in the eastern Mediterranean along with Greek-Israeli-Cypriot cooperation in energy exploration, marketing and infrastructure, brings urgency to the matter.

For years, the Turks have waged an unrelenting campaign of terror against their Kurdish minority. It is estimated that since 1984, more than 40,000 people (mostly Kurdish civilians) have died in Turkey’s merciless campaign of terror against the Kurds. The Kurdistan Workers’ Party (PKK), the guerrilla group waging a campaign for greater Kurdish autonomy in Turkey is currently listed as a Foreign Terrorist Organization (FTO) by the U.S. State Department. The State Department should give serious consideration to de-listing the PKK from the FTO categorization but that action would largely depend on whether the PKK can refrain from targeting civilians.

Finally, the U.S. should declare the IHH, the Turkish-backed non-government organization that refers to itself as a “humanitarian relief foundation,” as a terrorist organization. The IHH is a Muslim Brotherhood offshoot with close links to Hamas. It was responsible for organizing the 2010 flotilla in which its ships tried to break the Israeli naval quarantine around Gaza. Israel maintains this quarantine to prevent arms and other contraband from reaching Hamas. Israel intercepted the flotilla and during the course of the operation, its naval commandos boarded the Mavi Marmara (the largest of the blockade-running ships). They were instantly attacked by IHH terrorists armed with clubs, knives and “hot weapons.” The commandos killed 10 of the Turkish assailants in self-defense. The IHH has been placed on Israel’s terror watch list and the group has been banned from the country.

In 2010, a bipartisan group of 87 senators penned a letter to Barack Obama requesting that the IHH be investigated and asked the administration to consider placing the IHH on the FTO list. The Obama administration took no action. The time has come for the Trump administration to list the IHH as an FTO, which would have an immediate negative impact on the group’s financial situation and hamper its fundraising and logistical activities.

Like all bullies, Erdoğan must be made to understand that his words and actions have consequences. It is doubtful that these actions will sway this megalomaniac but it may make Turks understand that their leader is leading them into the abyss.