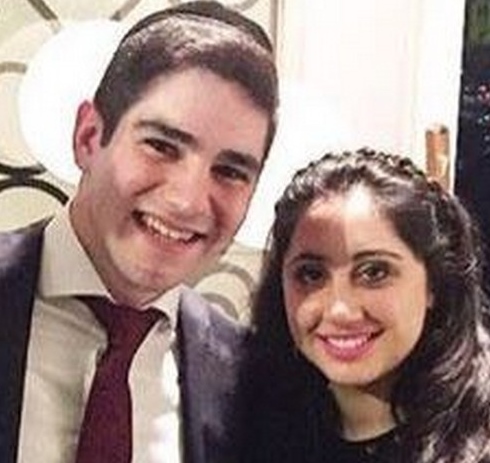 A  young Jewish newlywed couple were killed early
mioWednesday morning in a chain car crash on the Nassau Expressway in the Inwood section of Long Island.

They were trapped in their The  Nissan Altima that  burst into flames on impact during the crash around 1:42 a.m.

The newlywed couple who perished were  21-year-old Yisroel Levin, of Brooklyn, and 20-year-old Elisheva Basya Kaplan, of Far Rockaway.  Levin was buried  in Israel on Thursday, and  services were held at Yeshiva Darchei Torah on Beach 17th Street in Far Rockaway, Queens.

Five cars  collided in a violent crash that littered the roadway with car parts and battered hunks of metal, leaving investigators with a difficult task.

“You have five vehicles, over 800 feet of debris, you have oil, you have gasoline on the roads, thousands and thousands of car parts,” Nassau County Police Detective Lieutenant Richard LeBrun said. “We have one car that the engine actually came out of the vehicle”, ABC News reported

Two people are facing charges in connection with the accident. Zakiyyah Steward, 25, is charged with driving while ability impaired by the combined Influence of drugs/alcohol and any drug/drugs, driving while ability impaired by drugs, DWI and unlawful possession of marijuana, and 35-year-old Rahmel Watkins is charged with DWI.  Steward insists she was sober and the couple were to blame for the accident.