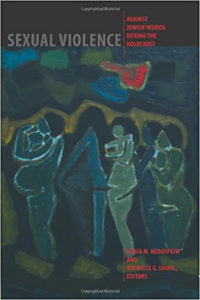 This exhibition grows out of the first book on the subject, Sexual Violence against Jewish Women during the Holocaust (ed. Hedgepeth and Saidel, Brandeis University Press, co-published by Remember the Women Institute, 2010).

At a time when powerful men’s sexual abuse of less powerful women is making daily headlines, this exhibition offers artistic representations of sexual violence with a much greater ratio of power to powerlessness—during the Holocaust and some later genocides. There were no conditions for a #MeToo movement for Holocaust survivors, and despite advances in technology and feminist ideology, this situation has not changed significantly for the victims of later genocides. The women were often murdered, and survivors were frequently silenced by their own unwarranted sense of shame. Those who spoke out were sometimes discouraged.

The earliest memoirs in the 1940s mentioned sexual violence during the Holocaust, but afterward the subject seemed to have almost disappeared. However, as proven in books, documentary films, interviews, and archived testimonies, various kinds of sexual violence were prevalent. These artworks commemorate and reflect upon this violence and serve to inform viewers about this missing part of history, encouraging empathy and shedding light on this heinous component of genocide. The exhibition reveals the past and confronts the present in order to include women’s stories in education for the future. The artists’ representations cry out on behalf of the victims who were silenced or chose to be silent, and viewers are encouraged to use their own voices to let the messages of these artworks reverberate.

Dr. Batya Brutin is exhibition curator and Dr. Rochelle G. Saidel is exhibition coordinator, with Rebecca Pristoop, Dr. Sonja Hedgepeth, and Karen Shulman on the exhibition team. There is also an Honorary Committee, as well as institutional partners. This exhibition grows out of the first book on the subject, Sexual Violence against Jewish Women during the Holocaust (ed. Hedgepeth and Saidel, Brandeis University Press, co-published by Remember the Women Institute, 2010).

The exhibition and catalog are being funded by tax-deductible grants to Remember the Women Institute, our 501(c)(3) not-for-profit organization dedicated to integrating women’s stories into history. We are indebted to The Schaina and Josephina Lurje Memorial Foundation, The Phyllis Backer Foundation, and The Five Millers Family Foundation, which provided major fiscal backing, as well as to many other donors who are recognized in the catalog.