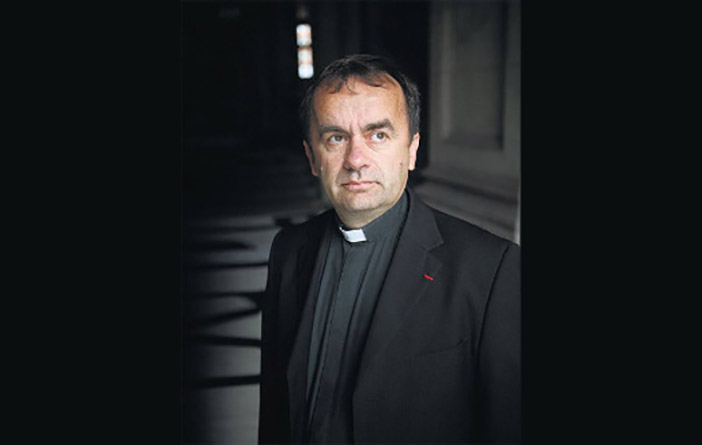 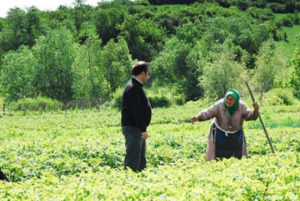 In 2003, Father Desbois returned to Rawa-Ruska and the new deputy mayor knew of his quest. He went to Father Desbois and said, “Patrick, we are waiting for you.” He led Father Desbois to a desolate area outside of town where about a hundred elderly people were waiting. They took him to the mass grave where the Jews of Rawa-Ruska had been shot and buried.

Father Patrick Desbois, a French priest, might be one of the greatest detectives of all time. In nearly a decade of work, he has uncovered the murder of 1.5 million Jews in Eastern Europe during World War II. His most recent book, In Broad Daylight, maps out the mass killings of Jews in Eastern Europe in exhaustive detail.

While the mass execution of Jews in countries like Poland, France and Germany in Nazi concentration camps and death camps is well documented, in the eastern countries including Russia, Ukraine, Belarus, and other neighboring nations, the Nazis used a different method to murder Jews. Over a million and a half Jews in these regions were murdered by mobile Nazi military units called Einsatzgruppen. Jews were forced into fields and woods, shot, and buried, their mass graves left unmarked and forgotten. Father Desbois calls these massacres “The Holocaust by Bullets” and he’s made it his life mission to uncover these crimes, case by case, and show the world what happened.

Father Desbois’ grandfather had been a prisoner of war in Ukraine in a village called Rawa-Ruska, though he seldom spoke to his grandson about what he’d seen there. A visit to Poland and Ukraine made the Holocaust more real and upon his return to France, Father Desbois began to learn Hebrew and Jewish history. He wanted to see for himself what had become of the Jews near the Nazi camp in Rawa-Ruska. 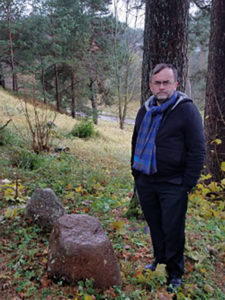 It took years of visiting Rawa-Ruska to finally learn even a part of the truth. At first, Father Desbois was rebuffed. The town’s mayor refused to say anything and villagers wouldn’t speak. Researching the town’s history, Father Desbois discovered that about 10,000 Jews had disappeared from the town during the Holocaust. He was flabbergasted. The murder of even one person in his small town would have been a huge event. Father Desbois couldn’t understand how the murder of 10,000 went seemingly unnoticed, resolutely unremembered.

He started tracking down survivors of the Rawa-Rusk POW camp who’d been interred with his grandfather. He finally met one, Rene Chevalier, a nephew of the famous French singer Maurice Chevalier, who agreed to meet. “Did you ever see Jews being assassinated?” Father Desbois asked him.

Chevalier’s eyes clouded over. “With a voice full of restrained emotion, he started to talk, with a fixed gaze that looked far into the distance,” Father Desbois later related. “He had witnessed the requisition of Jewish women to do the harvesting as there were no more animals to pull the carts filled with hay. They came in the morning with their children. The German who was guarding them could not stand their crying and whenever it irritated him too much, he would get hold of a little child and bludgeon it to death against the cart. In the evening, all that remained were the women, carts and hay.”

In 2003, Father Desbois returned to Rawa-Ruska and the new deputy mayor knew of his quest. He went to Father Desbois and said, “Patrick, we are waiting for you.” He led Father Desbois to a desolate area outside of town where about a hundred elderly people were waiting. They took him to the mass grave where the Jews of Rawa-Ruska had been shot and buried. One by one, the elderly people spoke, recalling the day the Jews were massacred. The Jews were herded together, led out of town, and shot near a freshly dug mass grave. Finding that some people in the pit were still alive, the German soldiers threw grenades into the pit to kill yet more victims. Some locals recalled helping the Nazis in the bloodbath.

When the testimony was over, Father Desbois was stunned. As he prepared to leave, the deputy mayor said, “Patrick, this is what I could do for one village. I can do the same thing for a hundred villages.” Father Desbois then realized that this was his mission and decided on the spot to document this and other long-forgotten massacres before it was too late. 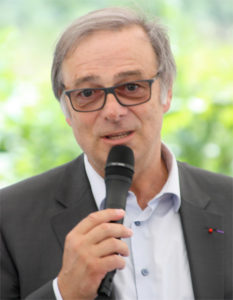 He started researching and visiting sites of massacres, and interviewing locals. In 2004, Father Desbois founded a group called Yachad-in Unum, a combination of the words for “together” in both Hebrew and Latin, to help with his work. The 29 full-time members of Yachad-In Unum, many of whom are young people working on their Ph.D.’s, provide him with support and companionship as he plumbs the depths of human evil.

That research has taken years and thousands upon thousands of hours. They have interviewed nearly 6,000 witnesses to the massacre of Jews and other minorities in Eastern Europe. Each investigation takes weeks to complete. “When they smile and welcome me into their homes,” Father Desbois explains of the elderly locals whose stories he documents, “I don’t know if they saved Jews or participated in the killing.”

“We were very surprised at the amount of locals who remember the day the Jews were killed,” Father Desbois recalls in an exclusive Aish.com interview. In each town where Jews were massacred, the children of the village were witnesses, and sometimes even participants. “The schools were closed, everyone went to watch the mass murder of their towns’ Jews.”

In the small town of Medzhybizh, the birthplace of the Baal Shem Tov, the founder of the Hassidic movement, Father Desbois and his team located 17 witnesses. “We wondered why there were so many witnesses.” It turned out that the day of the killing was like a holiday. “The killing of the Jews was a public event, like a show.”

A witness named Vladimir told Father Desbois about the day a Ukrainian policeman came to his school with a horse-drawn cart. The teacher pointed out each of the half-Jewish children, crying “Juden! Juden! Juden!” and the policeman took them away. Later, Vladimir described how he and his friends came to watch the Jews’ murder: “I came through the cornfield to see,” he explained. “For us children, it was interesting.” 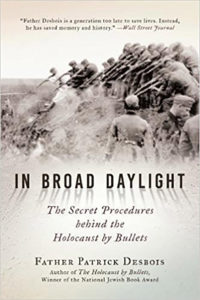 As a refutation to the Jew-hatred he has uncovered and to counter the growing number of people who deny the Holocaust, Father Desbois wrote In Broad Daylight: The Secret Procedures behind the Holocaust by Bullets, a painstaking account of the mechanics of killing whole communities of Jewish men, women, and children

For many witnesses, the murder of their town’s Jews was something to celebrate simply because it was fun, or because it allowed the belongings of murdered Jews to be seized by townspeople. Father Desbois has found there is very little regret and sorrow over the massacres. Some witnesses are even proud that they aided the Nazi killers.

In many cases, villagers were forced to watch Nazis murder. In other cases, some were eager participants. Typical was the testimony of one Ukranian named Andrei, who was 15 when he helped Nazi troops massacre the Jews in his village. Andrei insisted in wearing his old Soviet medals to the interview with Father Desbois, and sat proudly, showing them off. He was among other men in the village requisitioned to build a temporary prison to hold his town’s Jews. He recalled one old Jew begging through the barbed wire, telling him he was starving and asking Andrei for bread. Andrei traded him some bread for the Jew’s watch and calmly recounted the entire episode to Father Desbois’ team, seemingly undisturbed by his role in the suffering. “All their (the Jews’) goods were pillaged by the villagers. People took everything…”

“The shooting of the Jews in the village was like a carnival,” Father Desbois explains sadly. “Everyone wanted to watch, wanted to grab something.”

In all his years interviewing witnesses, not one has ever asked Father Desbois for forgiveness, as a religious leader, for their role in massacring Jews.

An old woman named Olga recalled her town’s Jews being rounded up and led to an execution point on September 21 and 22, 1943. “We lived not far from the paved path on which they took the Jews,” Olga recalled. “People said it was Judgment Day.”

It was a sentiment Father Desbois had heard before; the killing of Jews seemed to some witnesses to be a fulfillment of Christian doctrine. “Some people were thinking it had a religious element,” Father Desbois explains. “The Jews were dying in the middle of the Christians. They thought it was something from God.”

As a refutation to the Jew-hatred he has uncovered and to counter the growing number of people who deny the Holocaust, Father Desbois wrote In Broad Daylight: The Secret Procedures behind the Holocaust by Bullets, a painstaking account of the mechanics of killing whole communities of Jewish men, women, and children. The book chronologically describes the process of arriving in town, selecting townspeople to help, rounding up and killing Jews and then burying them in mass graves and removing all trace of the crime, providing a horrific account of the template Nazi troops used to kill over one and a half million Jews, and the role that bystanders often played in helping them. 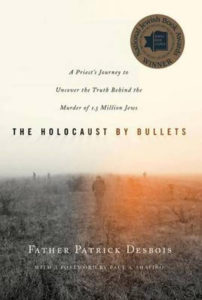 Father Besbois’ first book – “The Holocaust by Bullets: A Priest’s Journey to Uncover the Truth Behind the Murder of 1.5 Million Jews”

When he teaches about the Holocaust, Father Desbois stresses that it was a crime on a massive scale. Ideology played a part, but the desire to steal, to rape, to pillage, and to kill were what motivated most of the people he has interviewed. This year Father Desbois has been teaching at Georgetown University in Washington DC and is training students and professors alike to be meticulous in their research about the Holocaust, to be able to prove to a new generation that it did indeed take place.

In recent years, Father Desbois and his team have made numerous trips to Iraq, documenting mass killings by ISIS. He’s written a book on the subject which is due out in July 2018. He has continued his grueling pace in Eastern Europe, racing to document yet more mass graves and evidence of genocide against Jews and others. Father Desbois estimates he has about four more years in which he can work because witnesses to the Holocaust are aging and dying. That means only four more years in which “to give back the dead to their family, to the community and to fight strongly against the deniers.”

Purchase the book by clicking here.