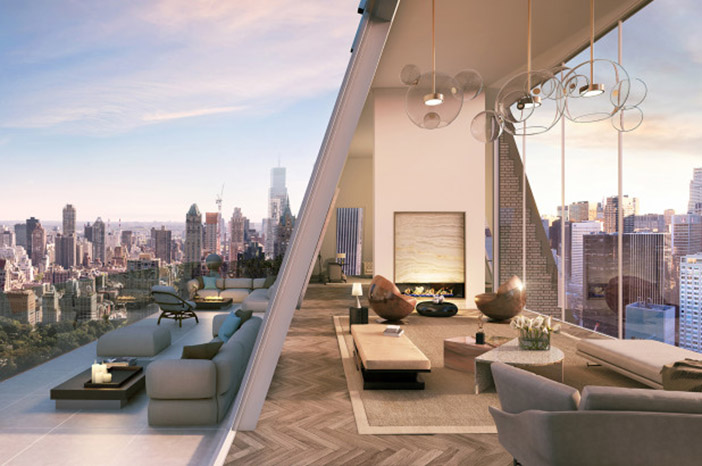 Developer Arnon Katz was looking for something unique as a new project when he discovered the Hampshire House at overlooking Central Park at 150 Central Park South.

He turned the attic of the building into a 10,0000-square-foot triplex overlooking Central Park.

The Hampshire House is a historic building in the city, hosting famed tenants over the years including late opera singer Luciano Pavarotti and artist Frida Kahlo.

The buildings on West 57th Street’s Billionaire’s Row have a certain “anonymity to them — even at the top,” architect Peter Pelsinski said. “This is different. The roof sets it apart. It has iconic status.” Peter Pelsinskli is the principal of SPAN Architecture.

Construction on Hampshire House began in 1931 during the Great Depression but stopped six months later when the Cleveland-based developer ran out of money. It started again when the economy improved. The fact that is was build in pieces, as opposed to all at once prevents the building from being a landmark.

The tower, crowned by a copper roof with twin chimneys, is in a different style than both the Spanish Baroque dormers below it and the base of the building, which is modern with white marble walls, aluminum fixtures and black-granite trim, the NY post reported.

Katz was searching for the apartment’s mechanical system and was told it was “upstairs” —in the roof, which housed an attic. At this point it all came together.

“An idea was born! We realized the possibility to transform storage space into an incredible, habitable penthouse”. ” Peter Pelsinskli explained.

For Katz, the fact that the building wasn’t landmarked turned out to be his “golden ticket.”. “All the stars needed to align, and in this case, they did,” he said. “We got lucky. The co-op board was sophisticated and understood the value of design, and the Department of Buildings was also on board.”

Street Easy, a leading real Estate listing site, describes the building as: “a brilliant combination of old world character, charm and elegance with the effortlessness, newness and conveniences offered by modern technology. A solid and resilient structure provides security, comfort, privacy and spaciousness. Location-wise, it really doesn’t get better than this. Located in the epicenter of Manhattan it is convenient to public transportation, shopping and restaurants and has the most spectacular views. It is located on Central Park South near the main entrance to the park – one of the most inspiring combinations of architecture, landscape design, and urban planning around the globe’